Fiera Reaper – “The Reaper is Coming” 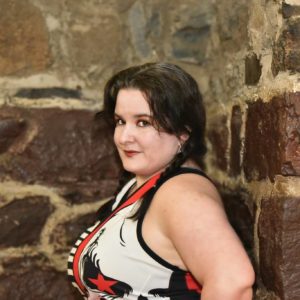 So, my first introduction to the idea of roller derby came from a friend of a friend who played with a local league.  We were in a zombie 5k together in November of 2013 and she mentioned she plays roller derby.  I didn’t even know that was still a thing!  She gave me some info on Fresh Meat and then sent me a message about an open house in January.  Unfortunately, I wasn’t able to go.  Some time passed before I was able to look into it again.  Sometime in winter of 2014, January or February, I looked into it again and found another open house with the league.  I was apprehensive, being overweight, out of shape, and never really interested in “sports”, but I used to roller skate as a teen and really enjoyed it.  So, one winter’s night, I went off to Pheasantland Roller Rink to the Roller Derby Rockstars Open House.  (Then named Pottstown Roller Derby Rockstars.)  In I went, recognizing the inside from my time there on weekends throughout high school.  There were a few people there, gearing up and chatting.  I wasn’t really sure who I should talk to or if anyone was in charge.  It was kind of awkward.  No one really approached me.  I recall meeting Miss Fortune Cookie as she struck up a conversation with me.  She answered some questions, introduced me to a couple of other people, and then talked me into putting on skates.  At this point, I hadn’t been on skates in many years.  I wasn’t a very good skater as a kid to begin with, but I geared up and rolled out onto the rink.  Cookie skated with me and chatted as we went along.  I was wobbly, as I figured I would be, but I made it around a few times.  Had she not approached me, I might have left and not pursued it any further.  Who knows.  I’m glad I went back, that’s for sure

My first official Fresh Meat Boot Camp was in February of 2014.  I met a whole bunch of very nice and interesting people from all kinds of backgrounds and remember feeling comfortable being there, albeit anxious about actually skating and remaining upright.  Learning to skate, and especially learning the skills for roller derby, is very challenging.  I tried to get there for every practice.  Sometimes I made it, sometimes life happened, sometimes the demons in my head kept me from going.

Nevertheless, I persisted.  I’ve seen many people come to practice for a while and leave for whatever reason… or move up through the ranks to bouting skaters.  I’ve continued to do what I can within the limitations of my life demands.  Everyone in the league has been so encouraging.  Even when I’m hard on myself for not being able to put more time or effort into it, my coaches have been nothing but supportive.  You do what you can when you can do it.  They push me – for sure!  They try to get me out of my comfort zone – heck, yes!  That’s what they’re supposed to do!  It’s been a long run in Fresh Meat.  My most recent accomplishments are being able to do proper crossovers and finally doing continuous crossovers for five minutes. I’m a ways off from passing minimum skills, but until then, I’ll just keep going!  Next challenge: Transitions and turn-around toe stops!  #TheReaperIsComing

At Rockstar Roller Derby we present to you – a 3